When choosing a motherboard the chipset is important. The chipset is a group of motherboard chips that essentially control all communication on your motherboard between the components that attach to it such as the CPU, RAM, graphics card, hard drives and more.

This means the chipset is vital for determining what expansion options you have and what you can connect to it, as well as what will be compatible with your motherboard and what won’t. Z170 and Z270 are both chipset designs launched by Intel.

But with a base of highly similar core features, you might be wondering what is actually the difference between the two? What CPUs do they support, how many USB ports and PCI lanes do they allow for, and how are they for overclocking and other uses.

If you are considering either a Z170 motherboard or a Z270 motherboard check out this detailed comparison below to see if either is right for you!

Check out our quick overview of these two motherboard chipset types here. Make sure to read the full article to see all the features in detail.

Winner: Don’t want to read the full article? The editor’s choice is the Z270! With 4 extra PCI-E 3.0 lanes you will notice heightened performance and resolve many connection issues as well as be able to support multiple M.2 slots. It also supports Optane Technology for caching and natively supports 7th Generation processors, while the Z170 needs a BIOS update to support them.

What’s the Difference Between Them?

This can actually be a huge differentiator when it comes to using your motherboard as Z170 may run into connection issues such as ports being disabled as you use others. This is avoided with the Z270 and you will have smoother, uninterrupted use. This is also great if you are using more than one external graphics card as it can really improve performance.

Another great thing about the Z270, is that the extra 3.0 lanes allow for multiple M.2 slots on the motherboard. M.2 drives are much faster than previous SATA SSDs and are relatively new but can be a huge benefit for your motherboard. M.2 was relatively late to the game, but is being used more and more on motherboards, and being able to connect more than 1 is more handy than ever.

Verdict: The winner here is the Z270, with an extra 4 PCI-E lanes you will get improved performance, reinforced connections and the possibility of multiple M.2 Slots.

The Z170 and Z270 are also different in how they support Intel Optane Technology. Z170 motherboards, in fact most modern motherboards, can use an Optane drive as standard storage which is useful and a great feature. However, the Z270 really shines here as it has an advanced capacity to use the Optane drive.

It can use it as a temporary cache which can totally revolutionize the speed you can access files and give you a way better performance of reading files. It is a bit like using a SATA SSD and caching with Intel Smart Response Technology to improve the performance of reading the platter drive. Optane however is a much faster choice and connects via PCI-E.

Although the actual differences between the Z170 and Z270 are fairly minor, the release of the Z270 chipset still meant a release of loads of new motherboards from different manufacturers with a variety of improved features.

Top brands like ASRock, Asus and Gigabyte were able to update their product lines, and meant that many Z270 motherboards do offer great improvements from the Z170. These changes saw an increase in using Thunderbolt 3 on motherboards which reduces driver and firmware issues from the previous version.

It also meant the release of motherboards with multiple M.2 slots as discussed above, as well as reinforced PCI-E slots.

Verdict: The Z270 opened the door to a release of new and improved motherboards that were able to use Thunderbolt 3, support multiple M.2 slots and reinforce PCI-E slots.

So let’s take a look at the CPUs that each of the two motherboards can support as this is key to any gamer, PC builder or enthusiast. There is a slight difference here between the two that put the Z270 on top. Both the Z170 and Z270 processors are compatible with 6th generation processors and both guarantee compatibility with Skylake microarchitecture with LGA 1151.

The Z170 is also compatible with some other Intel 6th generation CPUs. The Z270 on the other hand natively supports Kaby Lake as well, guaranteeing compatibility straight from the factory as well as compatibility with some other 7th generation CPUs with LGA 1151. If you have Kaby Lake, the upgraded microarchitecture to Sky Lake, then the Z270 could be a great choice as it should work smoothly from the off.

Got Kaby Lake and want to use a Z170 motherboard? All is not lost. The Z170 actually can also support Kaby Lake. HOWEVER, be very careful as it does not natively support Kaby Lake, so you will need to run a BIOS update for it to work, and therefore you will need a Skylake CPU to run this update. The Z170 motherboard will need this update in order to run any of Intel’s 7000 series processors. Make sure you have everything in place before deciding to go ahead.

Verdict: Z270! The Z270 has guaranteed compatibility with both Skylake and Kaby Lake, while the Z170 needs to run a bios update with a Skylake CPU first to support Kaby Lake. 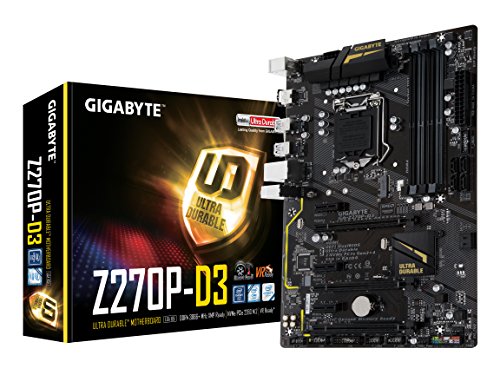 Now let’s take a look at memory. If you are a serious gamer, RAM capabilities are super important for your motherboard. Your RAM is essentially temporary memory which is used to store data while your computer is running and can affect the speed and quality at which your games run.

Both the Z170 and the Z270 chipsets are both designed to support DDR4 memory, one of the best high-end memories available. DDR4 memory generally supports speeds between 2133 and 3200 MHz allowing you to get some serious speeds. Both these chipsets allow for maximum memory of 64GB to be attached.

This should cater for what you need. DDR4 RAM is a big step up from the previous DDR3 RAM. It has a larger range of clock speeds available, it has more timings, it consumes less power and has reduced latency. Any RAM that is designed for Z170 chipsets is generally compatible with the Z270 too.

If you are building your own PC, it’s best to choose your processor first and then select the type of RAM you think you will need.

Verdict: Both! Both the Z170 and the Z270 support the same type of RAM. They both support the advanced DDR4 memory which is a big step up from the previous DDR3 memory especially for improved overclocking speeds.

Everyone needs a mouse, keyboard and wireless router, but there are many other customizable options that you may need to plug into your motherboard with a USB connector. USB capabilities are important as they can dramatically affect how many connectors you can add, and how much personalization you can do.

Actually both Z170 and the Z270 motherboards have the exact same USB compatibility, both supporting USB 2.0 and USB 3.0 technology. Both the Z170 and the Z270 can support 14 USB 2.0 ports. 10 of these ports support USB 3.0 technology too so you will not be short on connection slots. Therefore, with no significant improvement with the Z270, the Z170 would be just as good a choice in this regard.

Both chipsets support the same SATA 6GB/s. This means that it supports. Both motherboards also support x2 SATA Express ports which is great for any connections you might need. SATA ports enable you to connect mass storage devices like hard drives or optical drives so having these SATA ports is handy.

Verdict: Both. The Z170 and the Z270 both support the same SATA 6GB/s as well as the same number of SATA Ports.

Both the Z170 and the Z270 support the same LGA socket, the 1151. This, also known as Socket H4, supports both SkyLake and Kaby Lake so both should work for you just fine. The LGA 1151 was a serious improvement to the previous 1150 socket, the H3 socket.

Some people have found the Z170 motherboard to be a little cramped in terms of bandwidth, especially against some other mobos on the market. But is the Z270 any better? Well, there is not too much of a difference between the two but the Z270 does have an extra 4 lanes to play with which does help a little in terms of bandwidth.

Therefore if bandwidth is important to you, you might prefer the Z270.

Therefore they both allow you to boost performance and gaming speeds without spending more money. Of course, you will need an unlocked CPU from the 6th or 7th generation, and with your Z170 or Z270 motherboard you will be good to go.

Verdict: Both! Both chipsets support overclocking so either one can be a great choice for gamers.

So there you have the rundown of the Z170 and the Z270. Both chipsets with a similar set of core features that can both support DDR4 memory, they can both support overclocking and can support the same generation CPUs! However the bottom line? The Z270 is improved in several ways from the Z170. It has 24 PCI-E 3.0 slots, four more than the Z170’s 20.

This gives you increased performance, more room to play with connections and allows for multiple M.2 slots. It also natively supports 7th Generation and Kaby Lake processors straight from the factory, so it really is a better choice for those using Kaby Lake, but works for Skylake too.

The Z170 natively supports SkyLake and with a BIOS update can also support Kaby Lake. Finally, the Z270 supports Intel Optane Technology for temporary caching which massively improves file access speeds that you can’t get with the Z170. Overall, the Z270 is better, but the differences are minimal, so the Z170 may be sufficient for you.