What is Processor (CPU) in Computer? 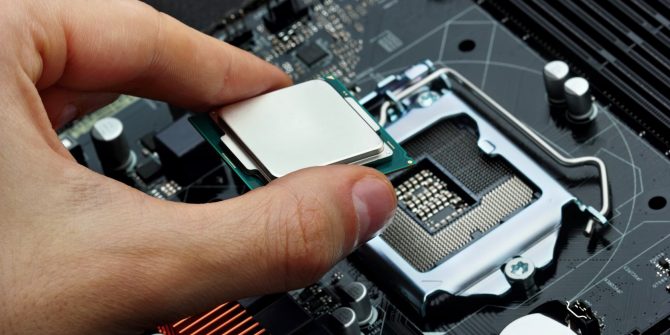 The processor of the computer is the brain of the computer. It handles entire data processing and is imperative for the functioning of any computer. Without it, you cannot run your machine. However, have you ever wondered what is a processor in computer? We will today go into details of the processor to help you understand what it exactly is.

What is CPU in computer?

The processor aka CPU stands for Central processing unit. It is the job of the CPU to handle all the instructions generated by the hardware or the software. It is popularly known as the brain of the computer. It is similar to a highly efficient calculator.

However, without the right interface, it will not be able to process any data. Due to this very reason, it has to work in complete integration with the operating system at hand.

The CPU is a chip mounted on the motherboard. As it processes more data, it generates heat. That is why; a heatsink covers it. The job of the heatsink is to distribute the heat. With the consistent dissipation of heat, it keeps on running smoothly as the temperature remains within the operating range.

Each motherboard consists of a socket for the CPU. The plug can be a rectangle shape or square shape because; the CPUs usually come in that shape. The pin layout of the CPU can vary from one model to another. So, you have to look at the compatibility of the motherboard and the CPU before choosing one.

These days, 2 of the most popular companies which manufacture CPUs are Intel and AMD. Both of these companies have a variety of models on offer. You can choose the CPU model according to the machine requirements.

What is the function of the CPU?

The CPU includes two components. These are:

ALU stands for the arithmetic logic unit. It is a circuit that performs all the logical and automatic operations which the CPU has to handle. The ALU is present in most of the modern processors to receive and execute millions of instructions every minute.

It can manage the logical operations like greater than, less than, as well as the numerical operations like multiplication and addition. The computer feeds all the information to the CPU in the form of Boolean strings. That is why; such logical and arithmetic operations are a necessity. They help in the execution of various instructions and commands which the software and peripherals feed to the processor.

These are the two parts of the CPU that keep it functional and handle all the processing of the computer.

The earlier versions of the CPU had names in the form of series of numbers like Intel 80486. However, since the 2000s Intel has started using the proper name convention. The 80586 was named Intel Pentium Processor. Ever since then, it has launched various processors like Celeron, Pentium, etc.

The CPUs these days do not just vary in the name or the speed but also in their architecture. These days, 32 bit and 64-bit CPUs are available. Depending on whether you use them for regular home applications or if you wish to use them for business, you need to choose the architecture accordingly. Some of the latest CPUs include Core i3, Core i5, Athlon II, A10 series, and so on.

What is Processor speed?

A processor can also consist of more than one core, which increases the instruction processing speed significantly. We will go into the details of these cores below.

Can you increase processor speed?

Overclocking refers to the process of increasing the frequency of the CPU beyond the standard specifications. It will also increase the heat production by the CPU, and therefore if you are not able to dissipate the excessive heat, the CPU will not operate seamlessly.

Many gamers especially go for the unlocked processor so that they can overclock it. Overclocking ensures that get maximum performance from their CPUs without having to upgrade to a newer one. However, overclocking has its limitations as well, and you cannot double the clock speed. You can increase it only by a fraction.

What are cores in the processor?

Games are becoming highly advanced with heavy-duty software like graphic processing suites that work to enhance the gaming experience. A single core in the CPU is not enough for all these requirements. That is why; companies these days are launching CPUs with multiple cores which can process a significant amount of data.

Another advantage of these cores is that they can help you with multitasking as well. Due to this very reason, you might be playing the game on your screen, and in the background, there might be video rendering in the process as well. With multiple cores and high clock speed, both these functions can go on simultaneously without a glitch.

How fast can the CPU transfer data?

While modern-day CPUs can quickly transfer data, but a bottleneck is due to the connectors between the CPU and the rest of the peripherals. These connectors can have a bandwidth of 100 MHz. So, in this case, the central processing unit can transfer the data pretty quickly. The data transfer speed of the CPU depends on the connectors in use.

Can CPU be replaced with GPU?

These days many people install an additional GPU in their machine. CPU stands for the graphics processing unit. It is especially useful when you’re playing heavy-duty games. The question which many people have is whether the GPU can replay CPU.

The truth is that while it can supplement the graphics processing capability of the CPU, but it cannot replace the CPU. That is why, even if you have a heavy-duty GPU in your machine, you will still need a CPU.

So, if you’re wondering what is processor in a computer, hopefully, our guide above has answered your questions. We have gone into great details to explain to you not just the architecture of the processor and what it does but also the different types available.

The next time around, you’re comparing the processors for your computer; you can keep the above few things in mind. It will certainly help you pick the right processor for your machine. Since it is an integral part of your computer, you cannot compromise on this vital piece of hardware.