Regardless if you’re a professional or amateur gamer, you know that your software and hardware are critical components of your gaming experience. From your monitor and headset to your ergonomic chair and gaming processor, every detail matters–there’s no cutting corners when it comes to selecting the items that can enable high-quality performance.

Of course, amateur gamers shouldn’t expect that having the best equipment in the industry will guarantee that you will be able to start flexing impressive stats, but it can definitely boost your overall gaming experience and help you hone in on the smaller details that other gamers might overlook.

It’s these smaller details in gameplay, especially, that more experienced gamers are looking to address when they’re looking to upgrade their gaming set-up. One of the key components of a good gaming set-up is a motherboard, one that is compatible with your processor, specifically designed for gaming, and aesthetically pleasing to boot.

Having the right motherboard will ensure that you can optimize for performance without worrying about things like over-volting your CPU. But finding the best option can sometimes be a daunting task.

There are tons of options on the market and no shortage of blogs and articles that go into the details of what you should be looking for. To make things easier for you, we’ve rounded up our picks for the best x99 motherboards for gaming below.

We review several products and highlight the pros and cons so that you have a definitive list in one place. We also include a couple of key features that you definitely need to look out for so that you’ll be a well-informed buyer. Take a look below at our picks and get one step closer to upgrading your gaming set-up! 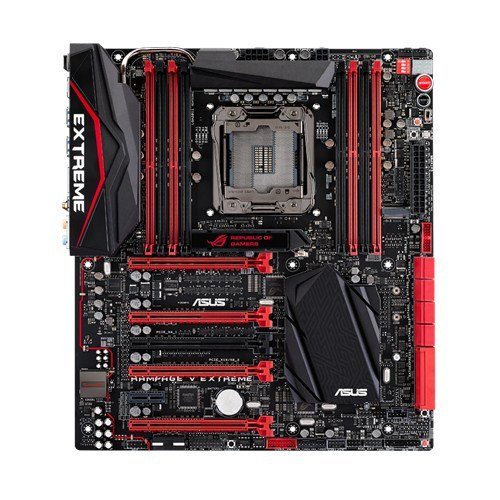 ASUS is a giant in the gaming and hardware manufacturing space. The Republic of Gamers (ROG) sub-brand is dedicated to gamers, so this has been specifically designed to meet all your performance needs.

All the drivers come on a USB stick instead of a CD (and it comes with a USB 3.1 add-on card) and the OC socket, OC panel, safe boot, and retry buttons comprise a powerful tuning kit. Overall, installation and set-up with the ROG Rampage should be extremely easy, as ASUS bios is very user-friendly.

It’s also an extremely aesthetically pleasing motherboard–ASUS products feature Aura Sync so that you can customize the light strips that link up to the motherboard. 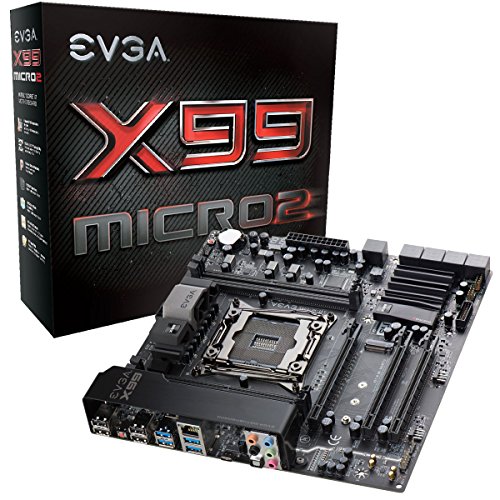 EVGA fans might recognize the name of this motherboard and note that it’s the second, and thus enhanced, version of the EVGA x99 Micro motherboard. It includes all the original features of the Micro but now comes with the nextgen USB 3.1 Type-C connector, which will deliver transfer speeds of up to 10GB per second for reliable performance every time.

There are three PCI express graphics expansion slots and also has ten SATA III / 6G ports, one Intel Gigabit Ethernet Port (10/100/1000), eight channel high definition audio so that you can hear more during gameplay, and the OC frequency increments in steps of 1 GHz instead of being tied to the SRAM speed.

It also features increased SATA ports, and overall a much improved layout design and BIOS. EVGA’s new GUI BIOS, especially, focuses on the best overclocking support, functionality, and usability. This is definitely a motherboard to consider for all those enthusiasts or aspiring enthusiasts out there. 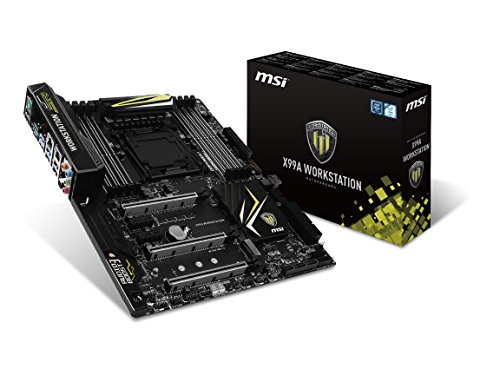 The MSI Form-Factor ATX is built for high-end content creation PCs, so this is a great option for those looking to build up their PC. If you already have a processor, don’t worry. This motherboard supports the latest Intel processors right out of the box, including both broadwell-e and Xeon based models.

It features steel armor (military class 5 components) and optimized PCI express slots to ensure stability, performance, and optimal connectivity while maximizing storage options. The M.2 boot drive has five higher capacity SSHD drives and the water-cooled quad core processor can overclock to 4.40 GHz and run for multiple days without rest with no problems and no overheating.

You can easily run video editing, graphics design, and other high-bandwidth programs at the same time without any problems, so long as you can plug it into an uninterruptible power supply. Once you do, you’ll experience unparalleled performance and connectivity. 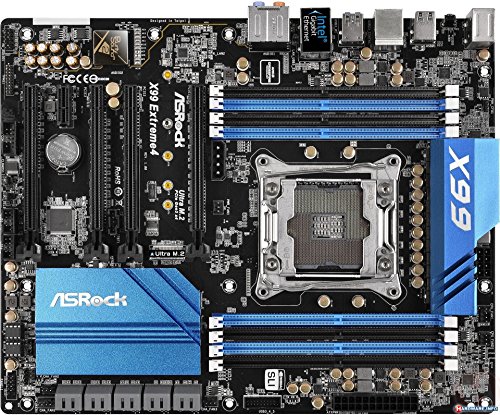 There is also a huge range of ports onboard, including six USB 3.0, eight USB 2.0, one eSATA, one LAN, and I/O audio jacks. You can also easily run multiple fans at full speed to ensure that it stays cool throughout gameplay, and despite all the features it still has extremely quick connectivity.

Start-up is also extremely easy: Windows boots in five seconds to the desktop so you’re not sacrificing any time or delay.

What to Consider When Buying a Motherboard

Obviously all of the motherboards listed here have an x99 chipset, but we want to highlight some features that make this stand out. These are designed and manufactured by Intel, and are intended for gaming enthusiasts and other high-end desktop users. Note that all of the supported processors use the LGA 2011-v3 socket.

x99 motherboards also support a number of CPUs, including variants of the Intel Core i7 Extreme, which is important to keep in mind if you’re building up your PC and haven’t yet got a processor. If you do have one, then you need to check that the motherboard you end up going with can support the speed and type of processor you already have.

Motherboards with Intel’s x99 chipset are the first to support DDR4 memory, which has been the new RAM standard since around 2007. It’s more efficient and quicker than DDR3, has lower power demands, high bandwidth, and higher density so this is the best of what you can get in the industry at the moment.

Generally motherboards will range from four to eight slots, so your maximum RAM capacity will be a lot higher. For example, a motherboard with eight slots will support up to 128GB of RAM.

In addition to checking the motherboard’s compatibility with your processor, you should also check that it’s compatible with your current operating system.

This is a smaller point to note because most motherboards on the markets these days are equipped with drivers for recent and current Windows versions, but this will impact whether your motherboard works or not so make sure you keep this in mind.

As you can see, there are a lot of options that you can select from as you seek to optimize your gaming capacity. Based on our careful vetting and expert opinion, you really can’t go wrong with any of the options listed above.

Motherboards with Intel’s x99 chipset will perfectly match your high-end processor and ensure that your set-up is top of the line. We guarantee that you’ll be blown away once you make your next purchasing decision and finish building up your PC.