eATX vs ATX- Which Motherboard Should You Buy?

ATX stands for Advanced Technology eXtended. The components compliance with these standard tells us that it will be physically and electrically compatible with other ATX components like computer cases and power supplies.

Motherboards can be a major decision that could have an impact on your computer’s performance with the Bus speed and built-in graphics varying significantly between models. However, these days with more and more things been standardized, or integrated into CPUs, your choice of motherboard will have virtually zero impact on raw performance.

Even though the days of fretting over a motherboard’s speed, are all about to be gone, motherboards still vary wildly in their feature set and build quality.

Now, because most desktop computers use ATX, that is what we are going to focus on but there are other types out there. ATX motherboards are available in different flavors. However, the most common of which are: 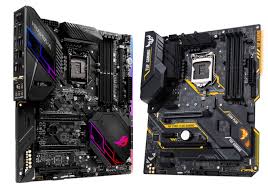 We will talk about the difference in just a moment, however, if you’re trying to figure out compatibility and that is all you care about, for power supplies, it comes down to the connectors on your particular power supply and the motherboard you want to connect it to. Just make sure that the power supplies have at least as many 24 pins, eight pins, and four-pin connector as you need.

For cases, on the other hand, any case that accepts a motherboard equal to or larger than the motherboard that you’re looking at will work. For example, a micro ATX board will work in the case of a standard ATX board – you need appropriate cases for both.

So, that being said let us take a look at the differences

So, ATX (Advanced Technology eXtended) motherboards have a wide range of cost but tend to be more expensive than mATX and less than eATX. They are 305mm tall, and 244 mm wide. They have 7 extension plots allowing for up to 7 single-slot expansion cards or up to four dual-slot expansion cards if installed in a case that has at least eight rare expansion card openings.

Because they are physically larger, they can have up to eight RAM slots and tend to have more SATA ports and front panel header ports like USB compared to the micro ATX boards.

These motherboards are more expensive and larger than ATX and add up to 305 mm tall and 330 mm wide- they are big! They still have only a maximum rear expansions slots, but their width allows them to accommodate dual workstation or server-class CPUs, and add up to twice as much RAM slots as equivalent ATX.

Because the eATX motherboards are geared towards professional or server use, they tend to have fewer bells and whistles like:

But more robust connectivity internally with things like SAS ports replacing SATA ports that are more common on the desktop. They need a 24 pin connector and will usually have two 8 pins as well- sometimes more.

Some other types of motherboard you might want to consider includes:

These are less expensive and have a dimension of 244 mm squared. They are available with nearly equivalent performance and features to their bigger brothers ( ATX ) with a couple of exceptions. Due to their size, micro ATX usually only have two to four memory slots and can have a maximum of 4 single-expansion slots or cards, or two dual slot expansion cards with a single slot card in-between.

This means that while a multi-core Extreme edition processor can be installed in a compatible mATX board, the maximum memory and graphics card capacity will be about half of an ATX equivalent. They typically feature a 24 pin connector and either a 4 pin or an 8 pin CPU connector.

Mini ITX motherboards are less expensive yet and are a mere 170 mm squared. In recent years, they’ve gone from lower power, quiet computing oriented products to high-performance small-form-factor gaming capable devices. They are limited to the desktop rather than workstation CPU platforms though and to a maximum of 2 memory slots and a maximum of one expansion card.

However, this still allows them to have up to a quad-core CPU, a high-performance dual-slot graphics card, and 16 GB of RAM– all at the same time. They have fewer SATA slots and front panel connectors than even mATX boards, due to their small size, but they often have integrated extras such as wireless and Bluetooth connectivity to compensate for their lack of an expansion option.

These motherboards are a bit of an oddity. They do not even have a standard size, but they are usually 240 mm more and 4 mm wide. The size increase comes in the form of additional height. It is right in the name, but it is more like an extra-large ATX motherboard than anything else. Pricing wise, they are similar to premium ATX boards, and when it comes to performance they have the same CPU, RAM, and rear slot configuration as ATX boards which is weird.

Their extra height should allow them to have eight or nine expansion slot but board manufacturers typically have used the extra space to give more room for beefy power delivery system and cooling around the CPU socket rather than the to add more extension cards slots.

One good thing that did come out of this motherboard was that cases are now being delivered to the market with more than seven slots at the back for better ventilation with multi-wave graphics card configurations on even standard ATX boards.

All the above are the most popular types of motherboards available, depending on the purpose of the computer you might want to set up, any of the types above should get the job done for you.