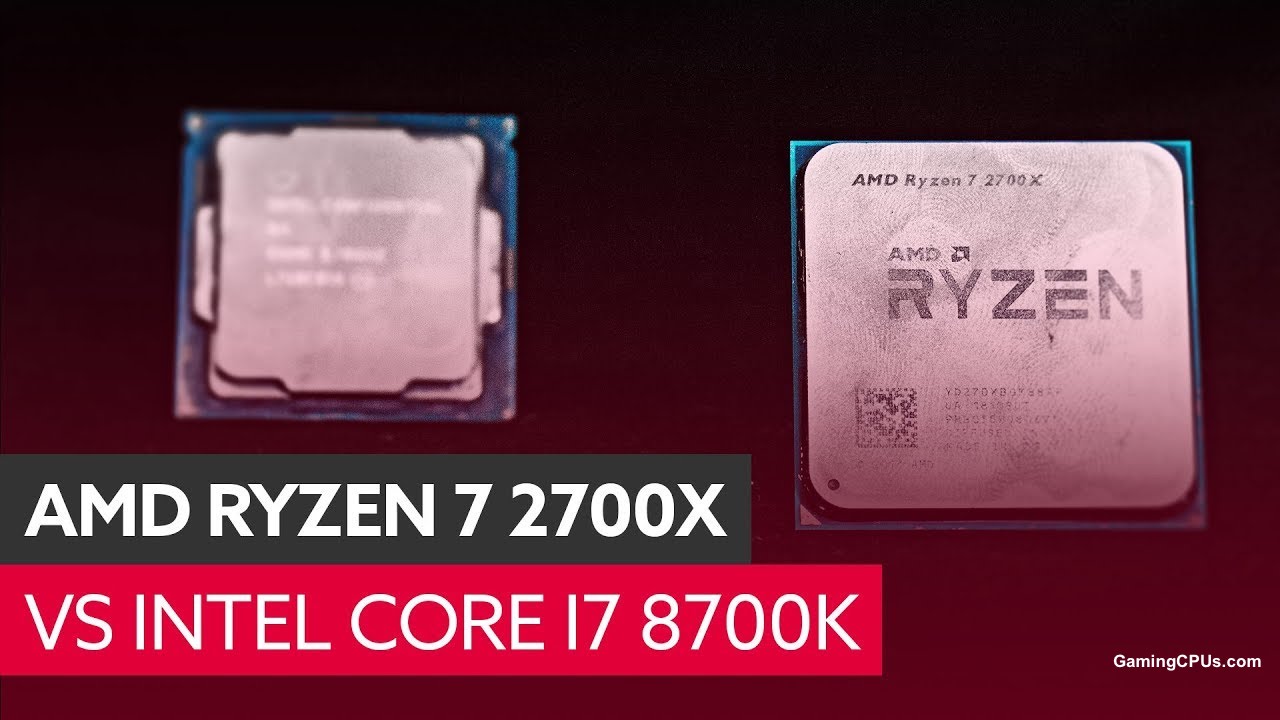 The Ryzen 7 2700X wins by being significantly faster in almost every task except gaming in comparison to Intel Core i7 8700K. The processors were tested in gaming and benchmark to test the performance in varied scenarios. The resolutions that were tested were 1080p (Full HD) in the games: The Witcher 3, Far cry 5, Battlefield 1 (bf1), Fallout 4, Total War Warhammer 2 (Warhammer II). As well as the software: 7zip compression, Blender, Cinebench, Firestrike, luxmark, photoshop, and x264. No overclocking was performed. Zen vs Coffee Lake.

So, let’s get right into it

So, AMD launched the second generation of their Ryzen processors which supports a live new 12-nanometer lithography, a new motherboard chipset, and higher base frequencies to boot. It’s the inevitable maturation of the Ryzen range, and it is definitely more of an evolution than the new revolutionary processor.

Now the Ryzen 7 2700x is the most powerful of its new second-gen processors. With 8 cores and 16 threads, it is also rocking a 3.7 gigahertz base clock, and a 4.3 gigahertz maximum boost clock. As you might expect, that’s the single-core max breeze frequency, but thanks to the new precision boost 2 tech, you’re not stuck with the same base 3.7 gigahertz speed when all cores are active. This means in games you’re generally getting speeds over 4.1 gigahertz as standards. It is all core boost speeds in my experience on the included stock cooler is a 4.0 gigahertz- yes it finally comes with a cooler, and it is a good one. And I do recommend that you use it, I don’t recommend that you spend money on an aftermarket cooler which isn’t worth it. This is because it runs just fine on all 8 cores 16 threads in full load. Compared with the previous generation, the 2700x has also got a higher rated TDP to 105 watts. The previous top-end Ryzen 1800X only has a 95-watt TDP by comparison.

AMD is also continuing to price up their new chips very competitively too. The 2700x is retailing for $$$. Also, it does work on the existing motherboards, and you do not have to replace your motherboard if you already have a 300 series board, however, it will require a BIOS update before it can take one of the second-generation Ryzen chips. However, modern motherboards have BIOS updates that automatically support this processor.

Well, the intel coffee lake core i7 8700k however, is just a 6 core 12 threads CPU. But it does start with higher frequencies out of the box. Despite a similar base clock of 3.7 gigahertz, the 8700k will boost all the up to 4.7 gigahertz and most motherboards will happily leave it running at that top speed even with all cores at full stretch. The Intel i7 8700k is retailing at $$$ on Amazon, which is a good chunk more expensive than the Ryzen 7 2700x.

Let’s Take a Look At Their Performances: 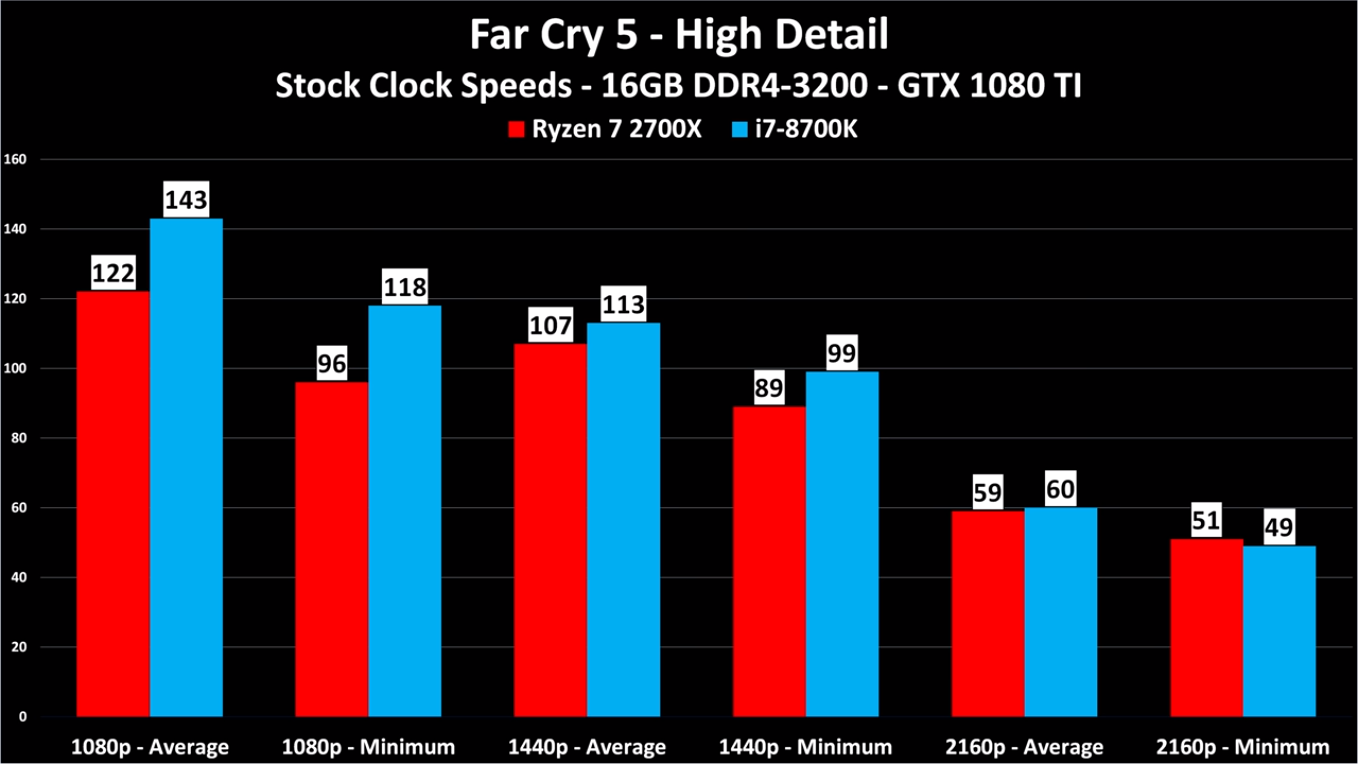 Well, AMD is doing a superb job with the new 2700x, where the original Ryzen chips got stuck at the base clocks when all the multiple cores were being tasked, the second generation chips sake off those shackles and push off that silicon much further. This means that the computational power of these processors is way ahead of a simile spec-ed first-gen Ryzen. Putting this current top Ryzen 2 chip against the best of the originals has the 2700x tangibly outperforming the 1800x and CPU benchmarking test.

Despite having similar specs, and being built from essentially the same architecture, the 2700x is some 17% quicker in CINEBENCH test, and 12% faster in the x264 video encoding text. And this is all down to the extra clock speed offered with these new chips- and that also means it is way ahead of the Intel Core i7 8700k.

The 2700x is 31% faster in CINEBENCH and 21% faster in the X264, which is a massive difference in computational power from this cheaper chip. Sadly, what that doesn’t translate to are any obvious performance-boosting games. Yes, the 2700x is using its cores more effectively now, but CPU speed doesn’t get you much in the way of extra frame rates. The 2700x is quicker than the previous generations, but only by a few frames per second here and there. However, the good news is, that it is the same measure against the fastest Intel coffee lake chip. Intel can still claim their processors are the best for gaming, even in the face of the second-gen Ryzen chips, but there is only by a few frames per second at most- and that is essentially invisible to the gamer especially when you start to push the graphical performance of your rig.

We did testing at 1080p to limit the benchmark’s reliance on the GPU, but even then the difference is negligible. When you’re gaming at 1440p or 4k, they simply won’t be any difference at all. One place where the Intel chip is still better off, however, is in terms of the power drawn. When pushed, the 2700x draws 249W from the wallet in our CPU load test. While the 8700k maxes out to just over 180 watts.

Overclocking is somewhere we thought the new Ryzen CPUs might show some great prowess compared with their first-gen chips. Especially given their new x470 motherboard and the increased clock speeds, but sadly that hasn’t come to pass. With the 2700x, the highest we can clock the chip to is the 4.3 gigahertz single core max. That is still higher than what the 1800x manages but not really pushing it beyond what you might expect.

Of course, having all 8 cores and 16 threads hitting 4.3 gigahertz gives you some serious computational performance. However, single-core clock speed is the only thing that is likely to change your gaming frame rates. The difference between a game running at 4.3 gigahertz and 4.15 gigahertz is pretty negligible. Well, this is where Intel’s 8700k’s ability to game at 5.2 gigahertz makes more of a winner. Though again, only in the games where CPU performance is a big deal. In GPU centric games such as Far cry 5 for example, it is only the minimum frame rates that should have any decent improvements.

What is better is the civilization VI AI turn time test. The overclocked 8700k is a whole second faster in the more AI-centric benchmark. So, if you care about grabbing the highest frequency numbers, then the core i7 still has the edge, but really it is then more about bragging rights than anything genuine performance lift in most games.

AMD’s Ryzen 7 2700x is a mighty impressively chip. It fixes the main issues people had with the original Ryzen processors, and are now giving us the CPU’s full power more of the time, and that means it is far more competitive against Intel’s finest coffee lake processor. And it was able to do it for a lot less cash too.

Well, besides the 8 CPU performance terms, the extra core counter of the 2700x really puts the super core i7 8700k in its place. This means that Intel is going to have to respond, whether that’s by dropping their pants on processor pricing or shipping out their eight-core chip, they just have to do something. But AMD has prepped this time too- there is no Ryzen 72800x in their current second-gen stack, which is odd, given the 1800x top the range- so that must be a halo product that AMD is holding back. A chip tweak to give us as much as the Zen plus silicon can offer, and it came out as soon as Intel released 8 core i9, making it a smart launch from AMD.

This shows that they have both learned their lessons and that Ryzen wasn’t just a flash in the pan, and the AMD CPU business is here to stay, and it is here to stay competitive. The very fact is that AMD is improving on their original should give gamers renewed confidence in them, and could even convince people who didn’t want to be early Ryzen costumers to take a point on AMD’s silicon this time around.

So, that was our review on these two processors from AMD and Intel. If you have any questions, kindly leave a comment below, and if you found this article helpful, then hit the like button

Buy Rayzen 2700x From Amazon at the best price